Posted at 10:41h in Rugby, Sports by Paul Murphy 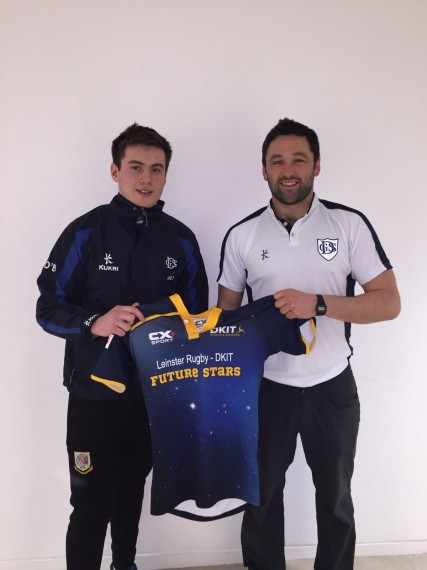 In early 2016 schools from the North East Leinster area were asked to put forward the names of the stand out players from their senior rugby teams.  Coaches considered players based on their ability to consistently perform to a high standard as well as to encourage and support their team mates. The DGS names on the short-list were Andrew Williams, John MacMahon, Charlie Donnelly, Cillian Quinn and Tom Bell.

Nominations were co-ordinated by the Leinster Youth Development Officer and a public vote was used to held determine a team of Future Stars.  There was stiff competition for each position from all the other schools but DGS does have a representative on this elite team.  Andrew Williams was selected at the position of scrum half and to mark this achievement Andrew received an award at DKIT on Thursday 25th February.  Andrew is fully deserving of this award as he was an integral part of the senior squad this year.  It should also be noted that Andrew filled a void and played out of position in last year’s senior team that reached the Leinster Development Final.