Posted at 16:58h in Gaelic Games, Sports by Paul Murphy 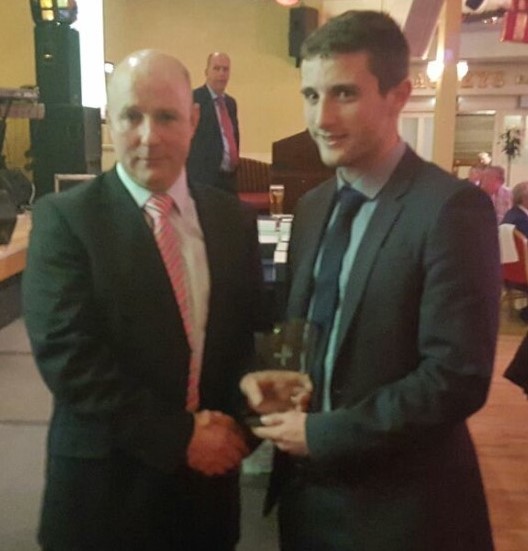 Kevin Carr receiving his u18 Player of the Year Award

Congratulations to 6th year student Kevin Carr who has been selected as the Louth GAA u18 footballer of the year for 2015.

Kevin has represented DGS on the Dundalk colleges football team for the past two years.  Mr Declan Hynes (DGS Teacher & Team Selector) said that “Kevin has shown great strength, commitment and leadership over the years and it was no surprise to learn that he was awarded this accolade”.

Kevin has also been selected to captain the Dundalk Colleges team for the coming year.  We wish them every success with this campaign which begins in December with an away game to Arklow.

Congratulations are also due to Oliver O’Reilly who has given many years service as school caretaker.  Ollie was present at the recent county awards as he was a member of the Louth hurling team who were junior all-Ireland winners in 1977.  The 1977 Louth team were invited to attend the 2015 county awards for a presentation of their all Ireland medals, outstanding for nearly 40 years.