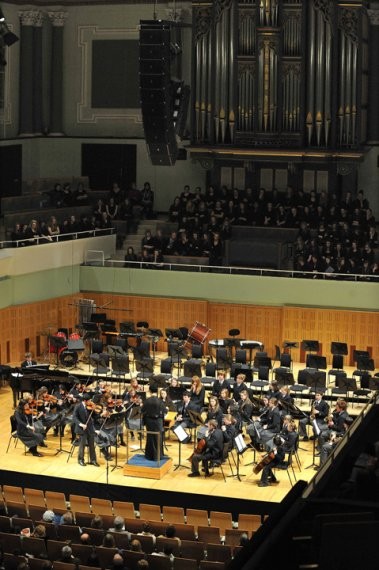 On Saturday the 4th of February 2012, Dundalk Grammar School orchestra took part in a concert held at the National Concert Hall in Dublin.  Dundalk Grammar School’s appearance at this event, organised by the Irish Association of Youth Orchestras, represented the culmination of many week’s practice during mostly out of school hours.

The first step on the road to appearing at this concert involved producing an audio CD of the DGS orchestra in performance.  After meeting the high standards expected by the Irish Association of Youth Orchestras, DGS was one of only three school orchestras to be invited to attend this national event.

Composed of pupils from the Junior School all the way up to Sixth Year in the Senior School, DGS’ orchestra performed their pieces with aplomb.  Former pupils Julie Campbell and Adam Byrne (from last year’s sixth year) also rejoined the ranks of the DGS grouping.

“It was an amazing opportunity for us to perform on a national stage,” says conductor and Music teacher Ms. A. McGuire.  “We all relished the challenge because we shared the stage with other highly skilled orchestras.”

After the afternoon recital, DGS pupils had time to unwind and time to get some dinner.  Later that evening everyone reassembled back in the concert hall to listen to some of the regional orchestras.  Much praise must go to Ms. A. McGuire for all her hard work in mentoring students for this performance. Very well done to all students who took part in this great event.