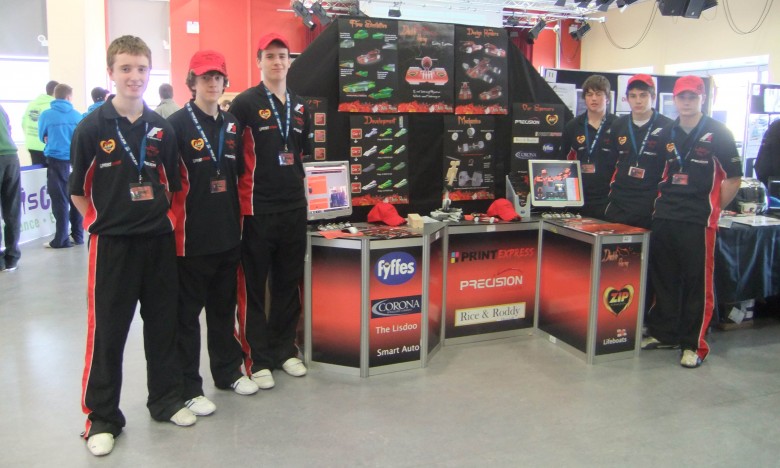 The 3rd of March 2011 saw Griffith College host the Eastern regional finals of the Formula 1 in Schools competition. Six transition students from “Diablo Racing” , Dundalk Grammar School, who were participating,  made the trip accompanied by Scott Nowell and Paul Murphy for the first time. The day began early as all students attending had to meet at the school at the painful hour of six o’clock in the morning.

We arrived at the picturesque Griffith College Dublin at eight o clock and began our preparation for the day. There were tense races held the whole day, which were very exciting. We received our itinerary for the day, which told us we had our car scrutineering at 11, our car race at 1 and our dreaded verbal presentation at 2. Our pit display brought great interest from fellow teams, teachers, judges and we especially intrigued the event manager. We were asked on numerous occasions for photos of our the pit stand and how many hours we put into it.

Before we knew it, it was 11 o’clock and if only someone had weighed our car on the official weighing scales before then. We all presumed that another of the team had done so and in the heat of the moment we naively handed our car in for scrutineering. We were 0.1 grams, lighter than a fingernail, underweight and therefore deducted 4 points and disqualified from the fastest car competition.

When race time came around we were downhearted as we knew we couldn’t be going home with the most important prize but still excited to see our car race for the first time. The car is propelled by a CO2 gas canister, where the car can reach speeds of 80 kmh. We destroyed the lap record and thanks to Alex Bloomfield’s quick reactions we held on to it for the day.

We went into the verbal presentation with our knees shivering from the nerves, but when we came out we knew we were behaving stupidly as it wasn’t anything to fear. The final event of the day was the award show. In the end we won “Best ICT and CAD” and we took a moral victory from being the fasted car there. We also qualified for the National finals.

We are currently preparing for the National Finals next month and are celebrating our success.