Posted at 10:33h in Rugby, Sports by Paul Murphy 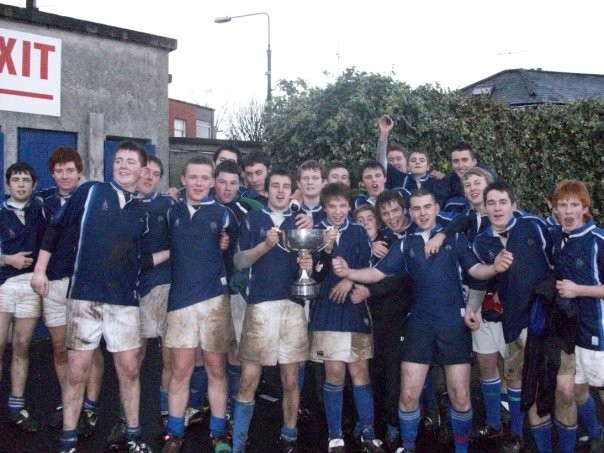 Prior to the Christmas break Dundalk Grammar School’s Senior Rugby Squad travelled to Donnybrook to play in the Leinster Senior Development Cup Final.  Expectation was high in the school as the team had made light work of all their opponents in the run up to this final, scoring over 200 points and conceding only 8 in all five knock-out stages of the competition.

Our opponents in the final, CBS Enniscorthy, started the stronger as they pinned DGS into their own half for much of the opening 35 minutes. Dundalk Grammar’s defence was solid throughout this sustained period of pressure, John McGahon and his charges sticking to their task and managing to turn over some ruck ball. CBS Enniscorthy were awarded three penalties for off-side offences in the first half, however only one was converted to leave the score-board reading Dundalk Grammar School 0 – 3 CBS Enniscorthy at the break. 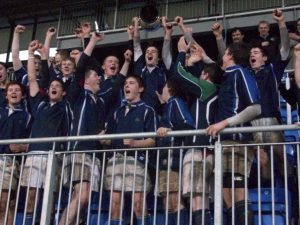 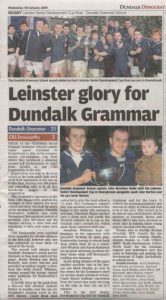 The second half whistle saw Dundalk Grammar’s initial nerves dissipate and as they took control of the game. Marks’, Bentley and Butterly won every line-out and provided an endless supply to their back line.  Robert Williams sniping around the scrum caused major problems for Enniscorthy’s number 9.  A terrific drive by the pack from a line-out ball allowed Andrew Naylor to trundle over the line for Grammar’s opening score in the 50th minute.  Conor Ryan converted to give the local school a 7 – 3 point lead.  The Grammar’s support play was excellent and Enniscorthy began to tire under this sustained pressure. Diarmuid Sloane latched onto a clean ruck ball inside Enniscorthy’s 22 to run in the Dundalk sides second try, which again Ryan converted with ease.

Jonathan Williams kept the pressure on his opponents with pin-point kicking in open play, Enniscorthy having to retreat back deep within their 22.  Alex Whately and Aaron Shekleton set up great attacking positions for their backs while Jeff McDonald’s tackling was immense.  In the dying minutes of the game another excellent take in the line-out saw Mark Bentley go over in the corner for Grammar’s third try and certain victory.  Conor Ryan’s brilliant conversion from the corner was really the icing on the cake.  The final score Dundalk Grammar 21 – 3 CBS Enniscorthy.

This is the first Senior Development Cup title for the school. It reflects the growing popularity and interest in Rugby at school and club level in the area. This victory is to be shared and celebrated by all the mentors at Dundalk, Boyne and Navan RFC’s who have devoted so much time in helping these young players develop over the years. Thanks also to Eneliko Fa’atau (Dundalk RFC Coach) for his assistance with training. Finally, sincere thanks to Colin O’Hare (IRFU Youth Development Officer North-East) for his constant support and assistance over the years in fostering and guiding the development of Rugby particularly at schools level.