Posted at 15:16h in General, Junior School by Paul Murphy

Congratulations to Lieutenant Oisin Duff from everyone in Dundalk Grammar School.

Oisin Duff graduated from DGS in 2016 and now at aged 20 was commissioned in the rank of Lieutenant in Oglaigh na hEireann on 26th January 2018 in the Curragh Camp by approval of An tUachtaran, Michael D. Higgins & representing an Taoiseach, Minister of State with Special Responsibility for Defence, Mr Paul Kehoe T.D.

The day held at the Military College & Curragh Camp training centre, was as much  impressive as it was emotional.

Starting with a reception in the cadets mess, a pre-commissioning inspection & parade with the air corp fly over and cheering crowds, a Mass & Blessing,  guards of honour by the junior cadets and the defence forces orchestra band and choirs providing impeccable sound tracks to each March, each parade, each inspection and finally to the raising of the flag and our National Anthem, the 3 hour long commissioning ceremony was all intriguing to behold and moving to observe as the 93rd class of officer cadets cut quite a dash in their striking uniforms their ritual moves were performed to precision  and executed to perfection.

Oisin was one of 10 school leavers selected & whom successfully completed the Cadetship. In total 60 Irish army cadets were commissioned as officers in the rank of Lieutenant. The process of selection, like the training was challenging and intense. It started with a rigorous selection process that spanned over a 9 month period and although highly competitive with over 4500 applying for 64 places, as it went on & Oisin progressed through each stage, he wanted it more and more, so much so he was reluctant to accept his CAO offer of engineering.

The Cadetship is about training Officer Cadets at the Military College to become leaders of character and competence and to be responsible front-line managers of their troops. Hence, why the training combines and stretches each cadet physically, mentally and academically in equal measures.

As well as being awarded their Presidential Commission they have also graduated with a diploma in Leadership, Management & Defence Studies from N.U.I. Maynooth.

Besides the academic and gruelling physical training, personal development is emphasised throughout and so each cadets is encouraged to develop their own personal interests as well as acquire new skills and interests. Oisin pursued his interest in rugby, soccer and debating.

He represented the cadet school on their rugby and soccer teams, and was on the winning team for the Kilkenny 7’s Tournament.He took up Canoeing & Kayaking and took part in the 58th International Liffey Descent, a 28.2 Km race.

Oisin represented the cadet school in the Inter-Colleges Irish Times Debating Competition and got to the Individual Best Speakers Semi-Final stage. His cadet class organised and participated in many other national sporting events, one of which Oisin thoroughly enjoyed was the 140 Km Run from New Ross to Maynooth in aid of Trocaire and the Jack & Jill Foundation in which they raised €6000 for both charities in the process.

They ran in their uniforms and boots and arrived at the finish line in Maynooth College to the rapturous applauds and cheers of the Town & College crowds whom came out to support of them.

In addition, to this fundraiser, his class raised funds for the annual military pilgrimage to Lourdes bringing local children and their families to Lourdes for a week, each cadet payed for their own trip and individually raised money for the fund. Oisin said this was such an enjoyable and memorable social occasion, meeting other militaries from all over the world as well as organising social and practical assistance for the disabled communities and their families and helpers, it was a privilege and a once in a lifetime trip.

Other highlights in his training was the awarding of a commemorative 1916 Medal from an tUachtarain personally and attending the Easter centenary commemorations outside the G.P.O. and the Garden of Remembrance.

Throughout the Cadetship they have the opportunity to attend very formal social occasions and two of these were the Pre-Com and Christmas Balls held in the K-Club and Lyrath House Hotels, demonstrating that these young gentlemen are equipped with the skills to be all-rounders.

Oisin upon his commissioning was awarded the rank of 2nd Lieutenant as a school leaver and so will go on to NUI Galway to complete his primary degree in Engineering, and then ultimately join the Engineering Corp but before starting that course next year, he will undertake 3 more specific  courses for the Infantry Corp in the Military college.

He has been appointed as a platoon commander in the 27th infantry battalion, 2 Brigade, in Aiken Barracks, Dundalk.

He is extremely excited about his future career with the Defence Forces, looking forward to continuous training opportunities as well as to the varied and challenging work situations and environments he will be in, but mostly to the continued and new variety of people he will meet, work and form strong bonds of friendship with, as he has already experienced.

Upon completion of his degree he will travel abroad and take on very challenging oversees duties and responsibilities which by all accounts is what every soldier wants, It is indeed a Life Less Ordinary. 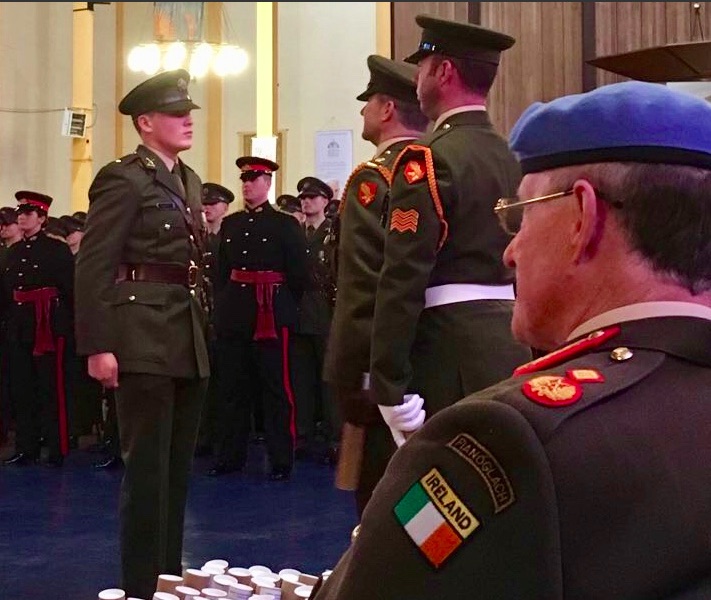 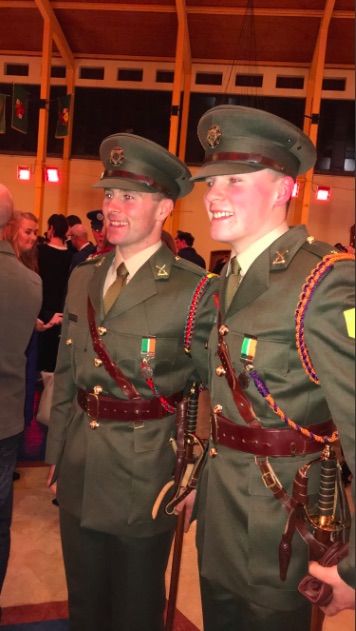