Posted at 13:53h in Uncategorised by Paul Murphy 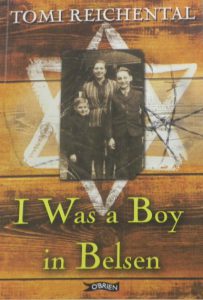 “In the last couple of years I realised that, as one of the last witnesses, I must speak out.”

Tomi Reichental visited the school on Thurday the 12th of September. Tomi spoke to 220 fifth and sixth year students, parents and guests in our state of the art Finnamore Hall. Tomi, who lost 35 members of his family in the Holocaust, gives his account of being imprisoned as a child at Bergen Belsen concentration camp. Tomi spoke of one of his earliest memories, watching his Auntie sew the star of David onto his school uniform. Tomi brought in a replica badge and displayed where it would be situated on his clothing. The black and white pictures in the history textbook came to life in front of our eyes. The emotional tension in the room was palpable as Tomi reiterated the scene depicted by a US soldier who was part of the liberation army corps.

Tomi was nine-years old in October 1944 when he was rounded up by the Gestapo in a shop in Bratislava, Slovakia. Along with 12 other members of his family he was taken to a detention camp where the elusive Nazi War Criminal Alois Brunner had the power of life and death.

His story is a story of the past. It is also a story for our times. The Holocaust reminds us of the dangers of racism and intolerance, providing lessons that are relevant today especially in schools with generation who are about to step into a world of economic instability and uncertainty. We must never forget.

It was a true honour to have Tomi Reichental visit our school. It is hard to express the value and importance of Tomi’s words and effect they will have on the students and myself for years to come.