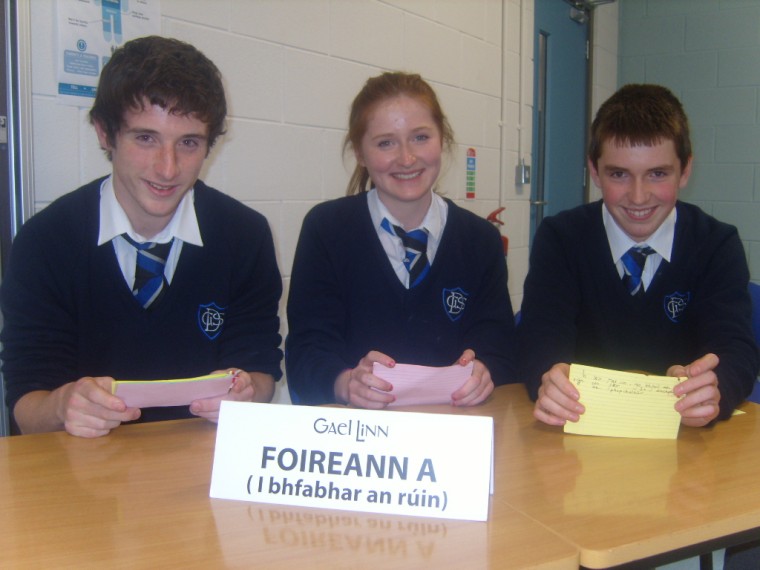 On Tuesday 19th February the DGS Irish Debating Team defeated Coláiste Lughaidh, Dundalk and Muckross Park College, Donnybrook, in Round 3 of the Gael-Linn National Debating Competition.  The debate took place in Drogheda and the motion was: “Aoibhinn beatha an fheirmeora Éireannach” (The Irish farmer has a lovely life!).

The Grammar School team had to debate against the motion and the team consists of Third Years, Aideen Fay, Kevin Carr and Patrick Byrne. All three speakers were truly impressive.

DGS are now through to the Leinster Final which will take place in the Boyne Valley Hotel, Drogheda on Monday March 4th at 5pm. If they are successful in that debate they will then represent Leinster and qualify for the All-Ireland Final! Beirigí bua a dhaltaí!

The motion was:
“Ba chóir bata agus bóthar a thabhairt do Trapattoni!” (“Trapattoni should be fired!”)

The Grammar School had to oppose the motion and the team was given just one week to prepare their speeches.  This was no easy task but Aideen, Kevin and Patrick rose to the challenge! Each student spoke for three minutes and delivered their speeches with impressive skill, confidence and composure, defeating their rivals and thus ensuring a place in round three of the competition.  Comhghairdeas leo!