Posted at 13:53h in Uncategorised by Paul Murphy

On Monday 1st December (2014) Mr Niall MacMonagle, well-known author and critic, launched Discovery, an anthology of poems by the students of Form One in Dundalk Grammar School. 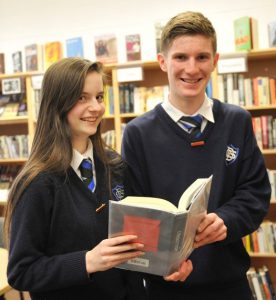 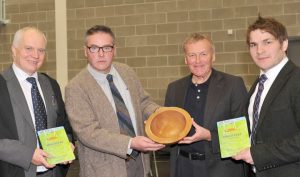 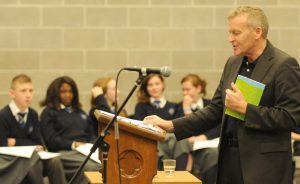 Mr MacMonagle began the afternoon with a lecture to Form Six on the poetry of Eiléan Ní Chuilleanáin.

He then met with the Headmaster, members of the Board of Governors and Parent Teacher Association, staff and student librarians to mark the completion of the school’s new library in the Harper Building.

Mr MacMonagle’s final engagement of the day was to launch Discovery in the school’s Finnamore Hall.

The book features contributions from all members of Form One, several of whom read their work to the assembled audience of peers, parents, teachers and school management. Mr MacMonagle gave an energetic and inspiring talk that touched on literature, art and the nature of inspiration itself.

Mr MacMonagle quoted from and referred to a range of poems from Discovery, offering high praise along with much support and encouragement to the group of students on their writing endeavours.

Mr MacMonagle was then presented with a wooden bowl, turned from a pear-tree by past-pupil Andrew Coyle.