Posted at 11:41h in Hockey, Sports by Paul Murphy 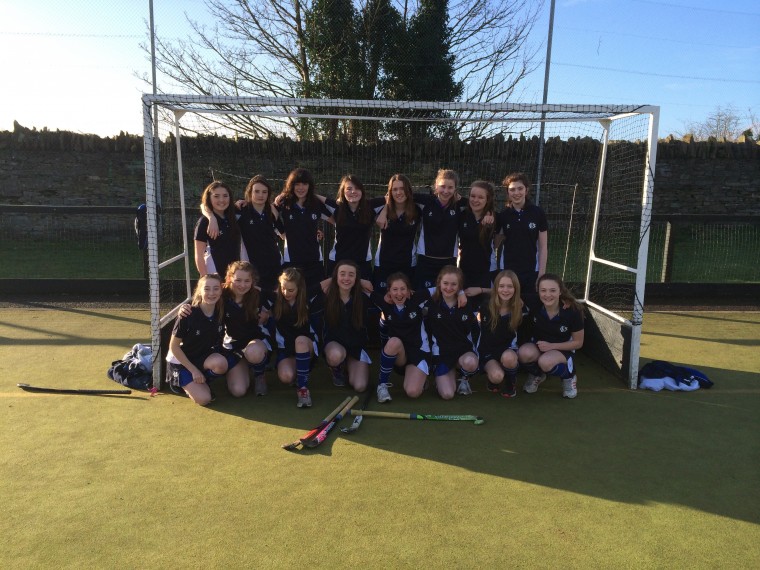 The second year girls hockey team have made it to the Leinster League final!

The girls are playing in the C section of the Leinster league this year.  The girls played four league games against strong Dublin opposition winning three our of four of these games. This left the girls runners up in their league which meant they had
to play a home play off against Loreto Foxrock to make it to the quarter final stages. The girls played some excellent hockey and won this game by two goals to one with goals from Sophie Stewart and Aiobhinn Fox-Hughes.

This win earned the girls a quarter final match away to St Marys College Naas.  This was a very tough match and the girls found themselves one nil down for most of the game, however with two minutes left on the clock Sophie Murtagh scored an equaliser to bring the game to extra time. No goal was scored in extra time so the game had to be decided by penalty runs. The Dundalk girls held their nerve to win the game with goalkeeper
Lauren Kenny saving three penalty runs and Stephanie Stammochoer, Seaghna Campbell and Sophie Murtagh scoring their penalties.

The girls then had to face Muckross Park away in their semi final. This was an end to end game with both teams having opportunities to score but neither team could find that finishing touch. The game ended 0-0 after extra time so again the girls had to go through the nail-biting penalty runs. Goalkeeper Lauren Kenny was a hero once again saving two penalties! Captain Charlotte McShane, Seaghna Campbell, Robyn Gallen and Sophie Murtagh all scored their penalties to send the Dundalk girls into the leinster Minor C final for the first time in the schools History!

The final is on Thursday 13th March at 11am in Tree Rock Rovers Hockey club, all support would be greatly appreciated. (The cost at the gate to watch the final is 1euro for children and 5euro for adults)