Posted at 22:15h in General, Rugby by Paul Murphy 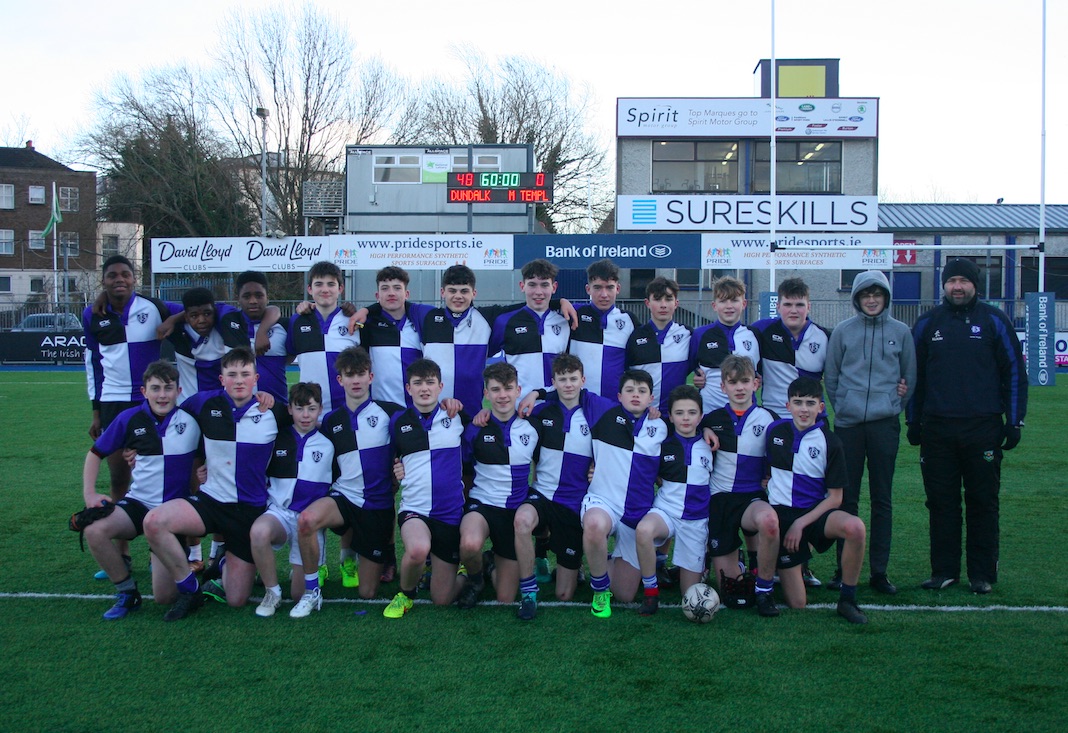 Congratulations to our Junior Cup Team who opened their Fr. Godfrey Cup campaign with an impressive win over Mount Temple at Donnybrook Stadium this afternoon.

With only four minutes played Dylan Keating broke two tackles in Temple’s 22 to touch the ball down.

The pack led by team captain Harry O’Neill tested their opponents defence and after relentless phases Harry broke through in the 9th minute to score. Mount Temple began to panic a little. The backline of Aidan Kane, Woodley Nicholson and Timmy Connolly injected serious pace in attack and in the 13th minute Matthew Meegan’s superb line saw him  carve through Temples defence to touch down for the schools third try. From the kick-off Harry O’Neill collected and moved the ball quickly to his backs allowing Timmy Connolly go over for try number four in the 14th minute with Dylan Keating adding the conversion.

This was followed by the try of the game in the 18th minute. From Temples line-out well inside the grammar half, Joshua O’Hare managed to steal the ball in their air. A series of ruck phases involving many of the forwards created good field position for the back line to attack and Joshua managed to connect with the pass from winger Aodhann Fitzpatrick to score in a move which he had started. DGS confidence grew as the half progressed, Mark Ajai and Jonah Power created lots of attacking opportunities for their backs. In the 25th minute Harry O’Neill went on a surging run, breaking several tackles and going over close to the posts. Dylan Keating converted.

Deshawn Ighodaro carried the ball into his opponents 22 and Harry O’Neill was on hand for the offload and touched down in the 38th minute for his third try of the game. Dylan Keating added the conversion. DGS began to tire a little in the final quarter given the intensity they had played the game at. Replacements Sam Dawson, Killian Dunne, Gavin Meally, Divine Ighodaro and Ross Clarke made a good impact, allowing grammar to sustain their momentum in attack. In the 51st minute a break by Aidan Kane, supported by his back line allowed Timmy Connolly touch down for the schools final try which Dylan Keating converted.

Well done to all the squad on a fine performance and many thanks to the supporters and parents who travelled to the match.

The Junior Teams 2nd round fixture will see them meet the winners of Kilkenny College v St. Andrews at Donnybrook on Tuesday 16th.

We will confirm the date and time of the 2nd round fixture which is likely to take place next week.