Posted at 17:55h in General, Hockey, Sports by Paul Murphy 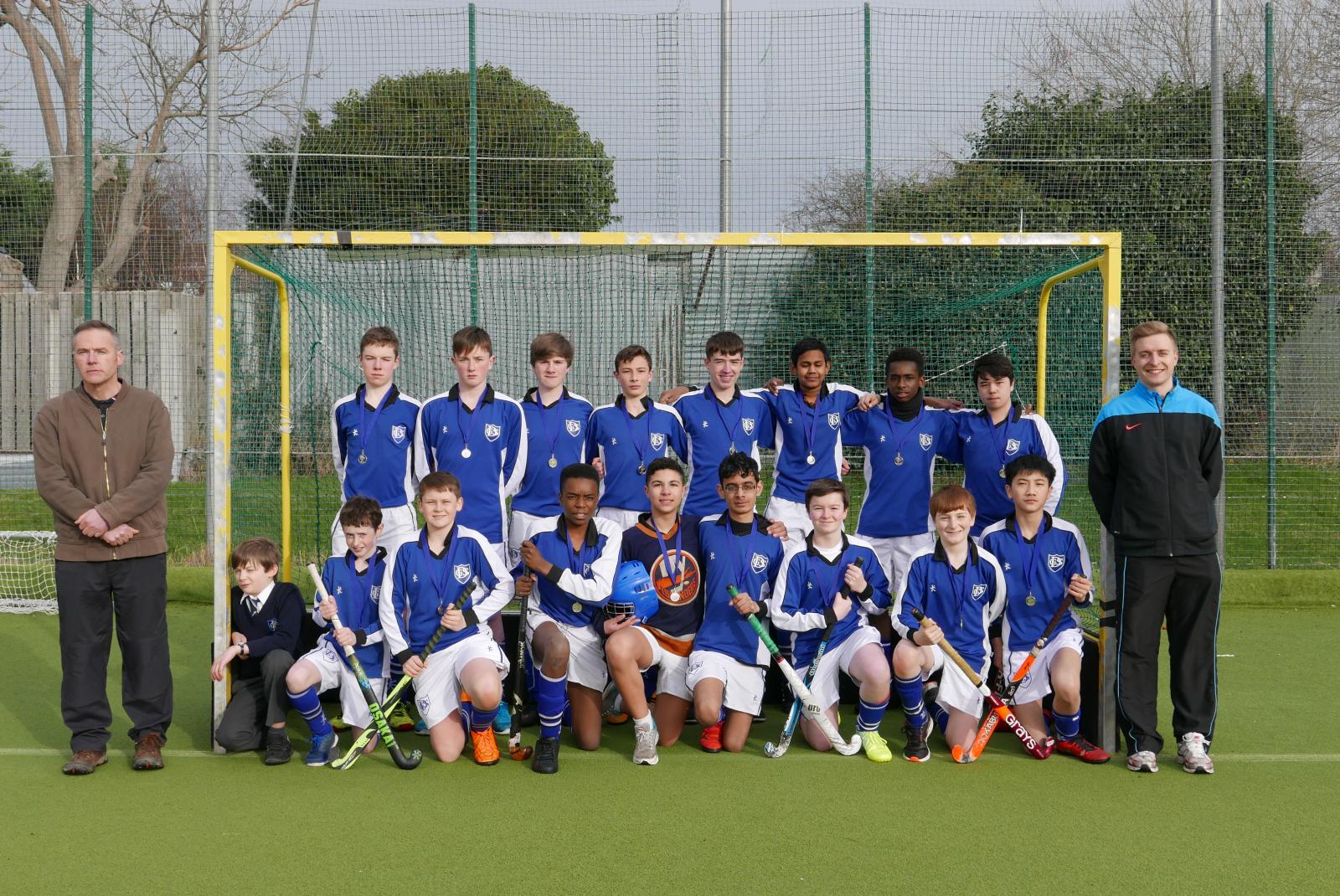 The Minor Boys hockey team travelled to Railway Union Sports Grounds in Sandymount last Wednesday, March 1st, to play Sandford Park School in the final of the Leinster Schools Minor C League. Before leaving Dundalk, the squad went upstairs in Finnamore Hall to look at the cluster of photos from 2010, which was the high-water mark for hockey in DGS. In the Meath and District Leagues, the girls won the Minor and Junior titles. In the Leinster Schools B Leagues, the boys won the Minor, Junior and Senior titles.

Although girls’ teams, coached by Nicola Clements, have continued to be successful in the years since, boys lost the Senior B League final in 2011, won a development league in 2013, and nothing since then. Sixteen secondary schools enter boys’ teams in the Leinster hockey leagues, ranging from the larger established schools who field two or three sides in each age group such as Wesley College, to a newcomer like Temple Carrig School, in its second year of existence. DGS has been competing in leagues since the mid-nineties, although at a disadvantage since the town hasn’t a hockey club so our players don’t have club sessions to complement school training, in the way many of the Dublin schools benefit from a choice of nearby clubs, nor is hockey played at local national schools. None of last Wednesday’s Minors had played before attending DGS, and none play club hockey.

Past-pupils have represented Leinster and Ireland at schoolboy levels after travelling to train with Glenanne, Navan, and Fingal hockey clubs, yet these have been the exception. The highest level adult club competition in Ireland is the EYHL, in which brothers Simon and Jeremy McKeever both scored last weekend for Railway Union against Monkstown HC. Another top level club player is Andrew Shekleton, now a PE teacher and coach, with Francis Foyle, of the current Minor Team. Last season, Eric Foye, past-pupil of St Andrew’s College and a clubmate of Andrew’s at Pembroke HC, also took these players. In 2004/5 Andrew was coached by Francis and then, in the following season, by his brother Glen, when DGS won the Minor B League for the first time. The school’s first Junior B League title had come in 2003, Ian Moore coaching and the late Colin Cunningham as captain. The Senior B title finally came in 2009, coached by Jonny Gregg and Scott Nowell with  Shane  Connolly  captaining.

A year later, the Leinster leagues were restructured, because fewer and fewer teams were willing to enter the A League, where the same two schools had a near-monopoly of success. (Since 2003, no school other than Wesley College or St Andrew’s College has won the Leinster Senior Cup. Challengers appear, then fade. The High School currently appears best positioned to loosen that grip.) Rather than render that league tiny, all schools were entered into the one competition, with a B league title preserved for a secondary grouping after the main title was decided.

DGS struggled in this setup, all the while offering a range of sports within the school that lead to players being spread thin across several teams. Against this background, a decision was made in 2015 to prioritise hockey and rugby in First and Second Year. To build up strength, DGS entered the Leinster C league, so as to meet sides of a similar level, while also taking our chances in the Cup, against firsts’ teams from stronger schools. The current school teams are the outcome of that decision, and the competition for places in the Minor squad, let alone on the starting team, is a healthy sign not previously seen during this decade. The existence of two separate teams in First Year is also encouraging.

The players understand how the future strength of their team is dependent on their staying in touch with classwork set during their absence at away matches. Past-pupils who’ve illustrated the benefits of combining academic work and sporting discipline are cited as examples. University College Cork has published research based on Leaving Certificate students over four years, which shows higher results gained by those active in sports:

Because several players have commitments to home clubs in a range of other sports, rugby, gaelic and soccer foremost, or other school activities such as debating, it’s a matter of being understanding and anticipating clashes when scheduling matches. The hope would be that students take part in a range of sports and preserve their life-long attachment to home clubs, while building up a unique identity as a member of a school team, which has a fixed span. On Wednesday, the players got on the bus knowing a win would see their photo added to the school walls.

Sandford Park School has previously won the Leinster Senior Cup but the last occasion was in 1972 during a decade when Newtown School could also be successful and hockey-playing schools were smaller in size. Their current Minors had won the southern Leinster section with fairly similar results to ours, so a close match was expected. They had been thrown earlier that day by a freak injury that ruled out a key player. What caught us by surprise was an early short-corner, at which their captain stepped up and dragged his shot, a standard technique at higher levels or age-groups but not one our Minors had met before. He roofed the ball with an excellent delivery, leaving our players behind almost immediately.  The remainder of the first half saw a gradual improvement until our midfield of Kyle Ramsay, Osgar Sullivan and Ben Wogan linked passes to Woodley Nicholson, captain and ostensibly a forward but dropping deeper on the day and he in turn set Chiboy Eriobu and Hugo Mulligan free on the wings with through balls. Basit Khan, in his first match after a month out injured cleared from the back, where Aaron Lamm stood firm.

Into the second-half, where Alejandro Mendez Garzon saved well when Sandford threatened, though thankfully they didn’t win any more short corners. DGS had more chances on the whole, but none were taken until a break lead to Finn Nulty finding himself in space in the centre of the D and calmly tucking the ball away. It was something of a puzzle what Finn was doing so far forward in the first place, given that he’s normally in midfield but for this match, after Dylan McDonagh’s injury, Finn was slotted into left-back; later, he explained that Bin Gao had told him to go up, that Bin was covering for him. Perhaps.

Full-time was approaching when Woodley took a bad knock below his shin-pad, and was helped off for icing with the hope of recovering for extra-time, while Colman Finlay came on to strengthen the defence and buy time. At the final whistle, penalty flicks were called by the umpires rather than extra-time, which on one hand came as a surprise, and it’s true the Junior League final also played that afternoon was settled after extra-time. We might have thought we marginally had the upper hand but given Woodley’s heavy limp it’s doubtful he could have run, so on balance the decision suited us.

Shades of the Cup-tie against Sutton Park, the five takers were chosen rather than volunteered.  They had practiced in training before the mid-term, but were so poor it seemed demoralising to continue. Maybe that was a mistake. Kyle and Woodley, first and second up, repeated their scores, but not so the next three takers. Alejandro saved twice, particularly well against a shoulder-high shot, and we were grateful for the left-post, with the result 2-2. Sudden-death followed, with the same takers allowed go again but in a different order if they wanted. Kyle and Woodley swapped so as not to be predictable for the keeper. Sandford were up first and they scored. Woodley’s shot was saved. Match over. Victory to Sandford.

Within a matter of minutes, Woodley gave a composed speech, in which he thanked the umpires Clare Shillington (incidentally an Irish international at cricket who has coached in DGS with David Symmons) and Peter Agnew, Chairman of the Leinster Hockey Association Youth Committee; the LHA, represented by John Flannery, Honorary Secretary and Claire Kelly, Administrator; Sandford Park, for a fine match, and the coaches from both schools. Mr Agnew and Mr Flannery had thanked both schools for keeping hockey going, before presenting medals to both squads. Less formally, Headmaster Mr Graham and Year Head Ms Matthews congratulated the DGS players on having come so close. The squad photo included Jack Gilmore, Vishva Nagappan, Matthew Ajayi and Aidan Kane, who had been stuck watching patiently from the dugout, and George Greene.

Back in the school, where eight of the players board, the first hour of Prep was instead spent in the library, looking at the photos Kevin Wang and Ruairi Nulty had taken during the afternoon. The squad photo won’t be going up on the school walls, and the gap stretches further since 2010. Perhaps this season’s -13’s will fix that next March.

The Minors travel to Belfast next Tuesday to watch the international side play Italy, then round off their season with a trip to Kilkeel High School.