Posted at 17:49h in General by Paul Murphy

On 14th April 2016 the Irish language drama group, “Caith Amach É” (made up of brothers, Niall and Seán McDonagh) came to DGS Library to conduct a workshop on the story-telling. 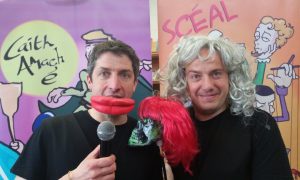 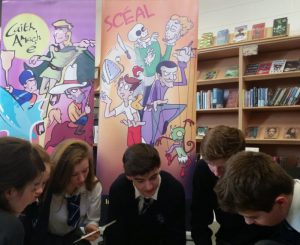 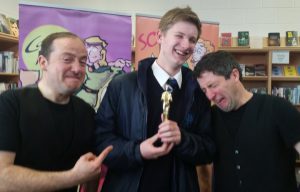 The lively actors presented a funny, entertaining drama sketch for the 3rd Years who then formed small groups and constructed their own stories as Gaeilge from storyboards given.

The students then acted out sketches in Irish from stories with the aid of props.

Prizes were awarded at the end of the workshop and the Oscar for Best Actor went to Cillian Jevens (pictured).

This was a fun way for the students to practise story-telling in Irish and to engage in a little drama!

It was spraoi agus spleodar all the way!