Posted at 13:54h in General by Paul Murphy 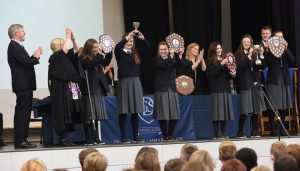 The school was honoured to have Dr Matthew Jebb, Director of the National Botanic Gardens, as guest speaker for the occasion.  In an inspirational speech Dr Jebb identified two key themes that he said still remained unexplained from a scientific perspective: 1) the origin of life and 2) how we use our brains to learn.

Dr Jebb referred to the education system that had applied in Ancient Greece and how the Greeks had believed in an encyclopaedic education, in which they sought to pass on all knowledge to the next generation.  He also stressed the importance of stimulating the brain through what he called “thought experiments” and gave several examples of such experiments in his speech.

The prizes presented on the day saw students rewarded for excellence across the whole spectrum of school life – this included academic prowess, community service, application and progress, spots and musical achievements.
The ceremony concluded with a wonderful performance by the school’s choir and musicians, previewing the school musical to take place at the end of October.  The event concluded with refreshments for all in the Harper Building, including a Fruit Break, sponsored by Fyffes Total Produce.