Posted at 13:54h in Uncategorised by Paul Murphy 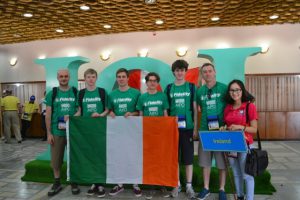 Congratulations to DGS 6th Year student, Teofil Camarsu, who took part in this year’s prestigious International Olympiad in Informatics (IOI).   Teofil was the youngest member of a team of 4 who represented Ireland in the beautiful city of Almaty, Kazakhstan.

With two competition days during the week, each member of the team had to solve three difficult algorithmic programming problems each day in the contest hall at the Al-Fabarbi National University.  Competing against 300 of the brightest young programming minds from around the world, Ireland were unfortunate not to bring home a Bronze medal.

Gary Conway from the School of Computing, DCU, who led the Irish Delegation said, ‘The IOI is probably one of the toughest competitive programming competitions in the world. When writing code under this pressure, simple bugs can catch out even the best competitors. The guys should be very proud of themselves for reaching this International Olympiad. To count themselves among the top 300 young programmers in the world looks very impressive on a CV’.