Posted at 09:45h in General by Paul Murphy 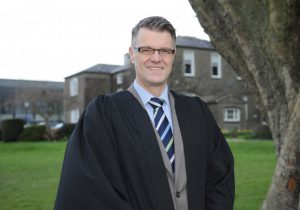 Mr Jonathan Graham will be the new Headmaster of Dundalk Grammar School from 1st September 2016 when Mr Cyril Drury steps down from the post. Mr Graham joined the Grammar School earlier this school year when he was appointed as Deputy Principal in September 2015.

Mr Graham will bring very extensive experience to his new position having worked since 2001 in a number of different roles in schools within the Republic of Ireland including periods served as Guidance Counsellor, Transition Year Co-ordinator and Deputy Principal. In addition Mr Graham also has the benefit of valuable experience gained from working in other education systems having previously taught in schools in England and Northern Ireland. 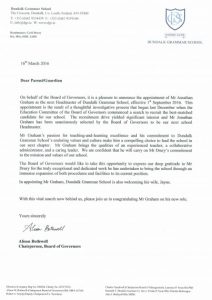 Mr Graham’s passion for teaching-and-learning excellence and his commitment to Dundalk Grammar School’s enduring values and culture make him a compelling choice to lead the school in our next chapter. Mr Graham brings the qualities of an experienced teacher, a collaborative administrator, and a caring leader.”

Mr Graham is married to Jayne and they have two children. He is an active member of the Clermont Chorale and enjoys walking, reading and keeping fit. He said that he is delighted with his appointment as Headmaster and is eagerly looking forward to the new challenges ahead.