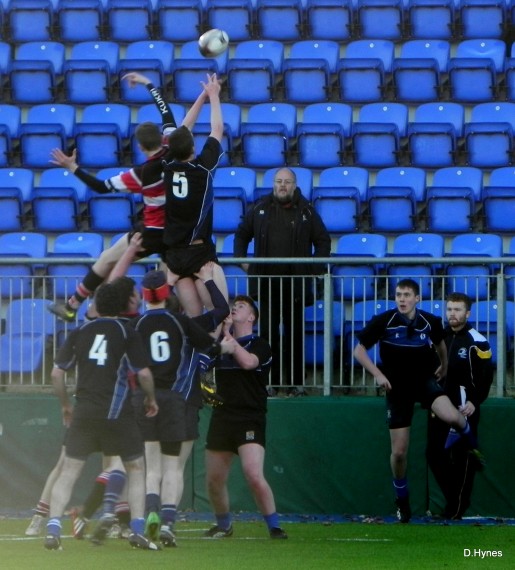 On Monday 8th December 2014 the school senior rugby team travelled to Donnybrook to play Coliaste Chill Mhantáin from Wicklow in the Leinster Senior Development Cup Final.  From the off the game was played at great intensity with both sides really testing their opponents. The lead was exchanged at different stages over the eighty minutes which added great excitement to the fixture.

Chill Mhaintáin scored the opening try but failed to add the conversion. DGS responed with a superb driving maul, allowing Rory Cousins to touch down over the line. Callum Lawson added a great conversion from a difficult angle. DGS 7 – 5 Chill Mhantáin. The Wicklow school quickly came back with another try which they failed to convert. This was followed up with a successful penalty kick to leave a half-time score of Chill Mhantáin 13 – 7 DGS.

DGS made a great start to the second half, the forwards linking well with backs and pushing deep into Chill Mhaintáin’s 22 – metre line. The sustained pressure was rewarded when Cormac Jones touched the ball down after several phases. Callum Lawson added the conversion. Grammar ahead by one point but a missed tackle in defence allowed the Chill Mhantáin full-back to run in their third try which was unconverted. The Wicklow team then secured a penalty which pushed the score out to 21 points to Grammar’s 14.

The DGS forwards raised their game again, Stephen McGivern’s surging runs causing havoc, while John Campbell’s terrific break saw him fall just metres short of the line. Rory Cousins work around the fringes was rewarded with a try which was converted; both sides now level at 21 points each.

With twelve minutes remaining Chill Mhantáin made a break and ran in a fourth try which was converted and gave them a 7 point lead. Unphased DGS came back and pounded their opponents defensive line and with four minutes to go Stephen McGivern broke two tackles and ran in a fourth grammar try. Callum Lawson, consistent as ever, slotted the conversion over, 28 points apiece. Grammar were very much in the driving seat now as they continued to exert great pressure in the final minutes. Chill Mhantáin were penalised for being off-side which gave Callum Lawson a penalty attempt at goal almost on the half-way line. The kick had the distance but just faded inches wide. The sides level at the final whistle.

A fantastic spectacle to witness and both teams to be heartily commended for the manner and discipline in which the game was played. Thanks also to the many supporters who travelled to the game.

A gallery of photographs is available if you click here.