Posted at 16:42h in Uncategorised by Paul Murphy 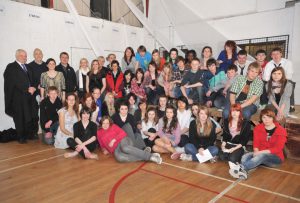 During 2010 and 2011, DGS has been part of a Comenius project, “The European Book of Culture”.  This two year initiative is part of the European Lifelong Learning Programme and is part funded by Léargas.  During these two years, our students have visited a number of schools throughout Europe.  This Easter term it was our turn to host a visit and so, on Sunday the 10th April 2011, twenty one students and six teachers arrived at Dublin Airport from Finland (Rautjarven Lukio ja Simpeleen yhteiskoulu), Germany (Friederich-Schiller-Gymnasium Zeulenroda) and the Czech Republic (Zakladni Skola Mecholupy).

This visit was the finale of the project and focused on creating material for a launch of the “Amazing Book!” the students have produced together. The “Amazing Book!” consists of five stories. Each country chose a national hero e.g. Finn McCool and were given a proverb from another country. They then had to create an opening narrative based around this. These parts were then swapped around until the stories had been completed by every school involved. The final book will be published in May 2011.

The Third Years of Dundalk Grammar School, despite the stress of their looming Junior Certificate exams, had fashioned a fantastic week for their guests . Each day began with assembly as usual.  Guest and host students then went to two classes and had project work (media, art, writing, drama) afterwards. Each afternoon was taken up with cultural activities which included Carlingford Adventure Centre, the Ulster Folk Museum, the Book of Kells, Dublin and a walking tour of Dundalk.  After school the international students returned to their host families to experience Irish family life.

The project was a great success thanks to all of the staff at DGS, our visitors and their hosts: the Breagy, O’Connor, Badun, Duffy, Burgess, Bell, Molloy, Walsh, Ronan, Rowntree, Kelly, Lucas-Clements, Hayes, Thongthip and Ellis families.